With just three characteristic words and in one sentence, Plato gives the characteristic shape of the island-continent. The matter of its length has already been partly analysed in the Methodology of Mythology (MoM) while some additional information is given in the page “Key Researches / Actual length of Libya and Asia” as well as in the description of the travels of Herodotus in Africa.

(As mentioned elsewhere, an island-continent is a massive single landmass surrounded by water (for the ancient Greeks, any kind of water, as rivers, lakes, and several type of Seas) for example, the Americas, Africa and Australia, or Atlantis in the present case. 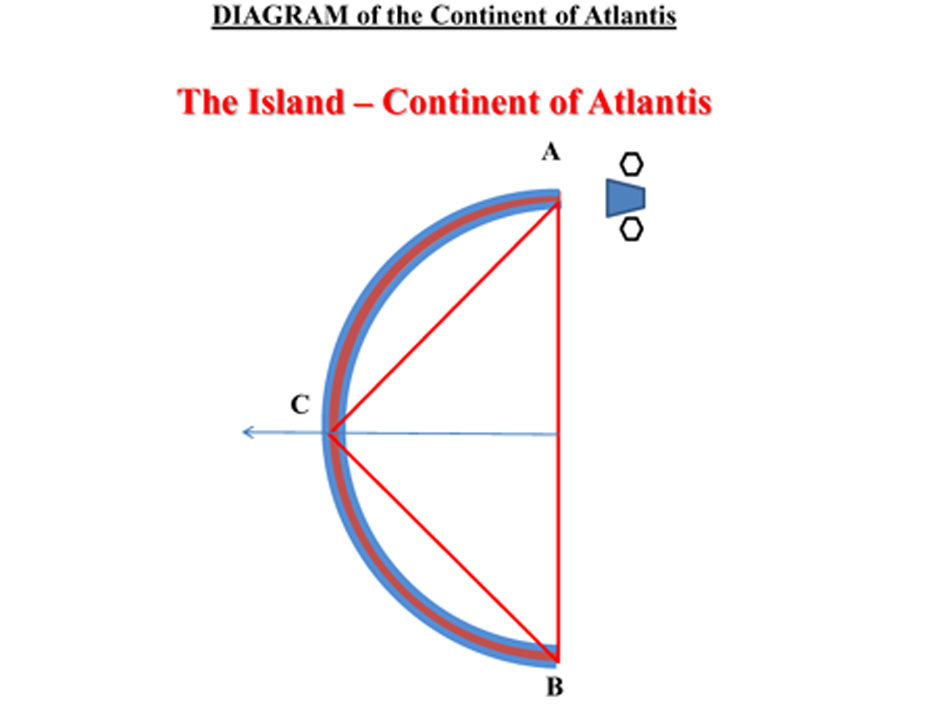 Image 1. Geometrical shapes came from the new translations depicting the Continent! When Plato describes places, the researcher will execute geometry and algebra and should be alert. Plato never gives shapes ready, because he always believed that true education is gained through discourse and reflection rather than through memorizing predetermined knowledge. Indeed, because he is literal, when he writes “Tetragon”, for example, he means a shape with four corners and not a square i.e. an even sided rectangular shape with four right angles, as one would usually but wrongly imagine and possibly erroneously translate.

Red Arc=Continent. Blue lines=Water bodies. West side is Atlantic Ocean. East side is Atlantic Pelagos, Atlantic Pontos, rivers and lakes. Ancient Greeks named a place as an Island, if it was surrounded by waters of any kind. (Νήσος = Nisos = Island. The root comes from Nis=Duck. It is the picture of a Duck with waters arround it. Also from the verb Νέω=Naeo= Swim which comes again from the same root).

So when he describes the “mouth” of the Pillars of Heracles, the shape of a mouth must be designed, which, seen from inside the head, is a small cavity that narrows to teeth and lips before opening to the big space outside. The Pillars are sited at the narrow point. In another page is an explanation as to the geographic location of this opening. In any event, it was never at Gibraltar and there is absolutely no historical (never mind archaeological) evidence (up to Roman times) of it ever having been there. Gibraltar as the site of the Pillars is a dogmatic opinion, since Roman times especially, that arose and persisted in the midst of coincidences, reservations and objections. This is one main reason why many researchers of this myth no longer take this geographical location into consideration and instead point to locations around the globe which could possibly resemble the once again possible -due to the deficiencies in existing translations- description of Atlantis. It is referred to as a possible description, because nobody had ever exhaustively examined the information given by Plato in description of the exact shape of Atlantis. The new connotatively accurate translations have no “blind spots”. Even more, very few were interested in ascertaining the length of this continent, despite Plato defining it as larger that Libya and Asia together. To this end of finding out the length of the continent of Atlantis, seriously investigative work was conducted to determine the dimensions of the lands of Libya and Asia of that time. Mainly examined were the writings of Herodotus who lived (mainly) before Plato. This course of action, in correlation with the inductive reasoning of Plato described in MoM 1, came up with the result that the continent of Atlantis was more than 4.300 km in length. Ultimately, it was found to be 5.100 Km when measured by the arc of the semicircle it was, because in straight lines it is almost 4.600 Km. In the middle of the arc of the continent was a harbour and a “poros” which was a narrow channel or navigable waterway through which the Atlantian vessels could leave the island in the middle of the island-continent towards the open sea. The harbour and “poros” are unlikely portrayals really, with graphical depictions too improbable to exist.

A half circle i.e. a semicircle or halfelipse, defines a half equilateral – orthogonal parallelogram or rectangle (square) with one corner being the centre of the island-continent (or an isosceles triangle with its vertex being the centre of the continent-island). Note must also be made that the texts indicate two locations by the name of Gadeiriki, one at the northern tip of the island of Atlantis and another at the northern tip of the island-continent of Atlantis.
The Atlantic Pelagos (not Ocean) is just “outside” of the rhombic island but is also “inside” the Pillars of Heracles. The Atlantic -it seems- Pontos (a characteristic type of sea) is to the right or inner side of the curvature of the continent-island while the body of water to its left is not indicated. Therefore, if one wants to locate the island of Atlantis (the rombic-shaped), one needs only to draw an equilateral triangle with its vertex in the centre of the semicircle. (Image 2). The writer did this, and had locate for first time easily the Island of Atlantis (Atar + Richat)with a tiny deviation of a few tenths of Kilometers. This place was -so far- totally uknown to him. 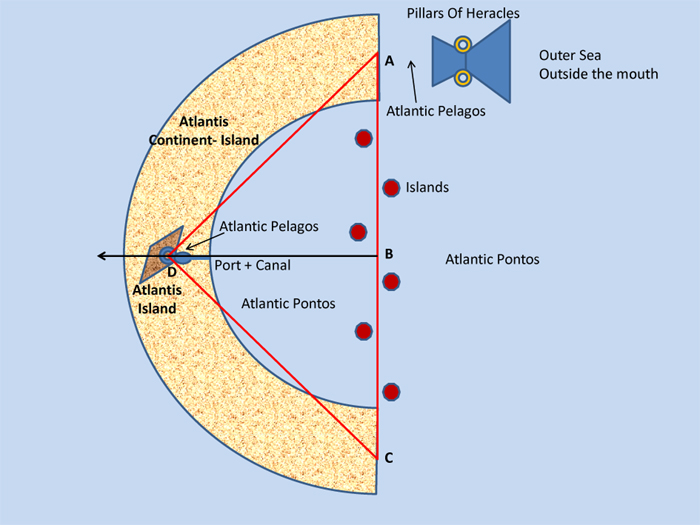 Image 2. According to the new data arising from the new translations, the Island of Atlantis was situated in the middle of the Island-Continent. So, given that the latter is a semicircle that derives an isosceles triangle, its base perpendicular bisector ray to the vertex should pass through the middle of the (rhombic) Island of Atlantis. By transferring this diagram to the map and tracing along this ray, the researcher in effect found the “island”, passing by it by a mere 80 km in a continent thousands of kilometres long. It is evident that if the present writer had chosen to position the end points of the base line of the isosceles triangle slightly elsewhere, it would have been quite likely that its vertex would have been directly on the island. Even so, this incredibly small deviation, considering the size of the continent, is testimony to the accuracy of the translations, the accuracy of their comprehension and above all, to the accuracy of Plato’s geometrical definitions.

The rhombic shape of the Island of Atlantis is described in Critias while its location is obtainable in Timaeus. Plato gives it as being in the middle of the Continent as to its width and height. He also gives a sketch of the place of the islands via which one could cross from one end of the Continent downwards to the other, thus also substantiating the direction of curvature. There is here another major misconception, whereby many consider the other end to which one can travel, as being America. Once again, mistranslated words and illogical reasoning intensify the confusion of interested parties.
The “outer” body of water on the top right (northeast) is the Mediterranean Sea. The terms “outer” and “inner” specified by Plato are of critical importance in determining locations.
In the middle of the inner edge of the continent, the Poros or narrow navigable channel, leads to the Atlantic Pelagos (a 2nd sea by the same name) that lies before and next to the rhombic Island. These are all surrounded by a vast plain which is not shown in this image due to the small scale.

Plato defined this Island-Continent as being past the Pillars of Heracles.
Even though it is not widely known, apart from historians and other interested parties, The Pillars of Heracles were never confirmed as having been where Gibraltar is today. As previously mentioned, this location was (and persists to be) dogmatically upheld, despite lack of documentation and constant, serious reservations from post-Platonic antiquity onwards.

In the page “Key Researches / The Pillars of Heracles” are given a few but important details in evidence of the Pillars of Heracles being actually at the Gulf Gabes in Tunisia. Only one German researcher in 2005 (U. Hofmann) and the present writer in 2008 have given historical data in support. The present writer, in order to substantiate this, subsequently retranslated all the ancient references he could find, to discover that, apart from Plato himself (!), his student Aristotle had indicated this location specifically. In addition, many reports were found to concur with this view for which, as mentioned, the strongest historical evidence is provided by the author of Atlantis himself and by his star pupil Aristotle. Who dare deny their authority?
Therefore, in the case of the Pillars of Heracles being at Gabes, immediately afterwards was a Pelagos sea (not ocean – the first of the two synonymous seas) and straight after that, the land of Gadeiriki at the front tip of the continent-island of Atlantis. Indeed, inland from this bay today, there are lakes and seasonal lakes with a combined surface area as wide as the Aegean Pelagos (Sea). Eratosthenes even gives the length of the voyage that matches the premise perfectly. There was drawn the first geometric point indicating the start of the continent. The rest was relatively easy, by drawing the semicircle ending at the “opposite and downwards” edge, as defined by Plato. Incidentally at that point is a mighty river, which was once mightier. And so was derived the diagram below.
It is realised that all these items of information were unknown until now, but that is the way it is. The new translations leave no room for doubt on this issue. 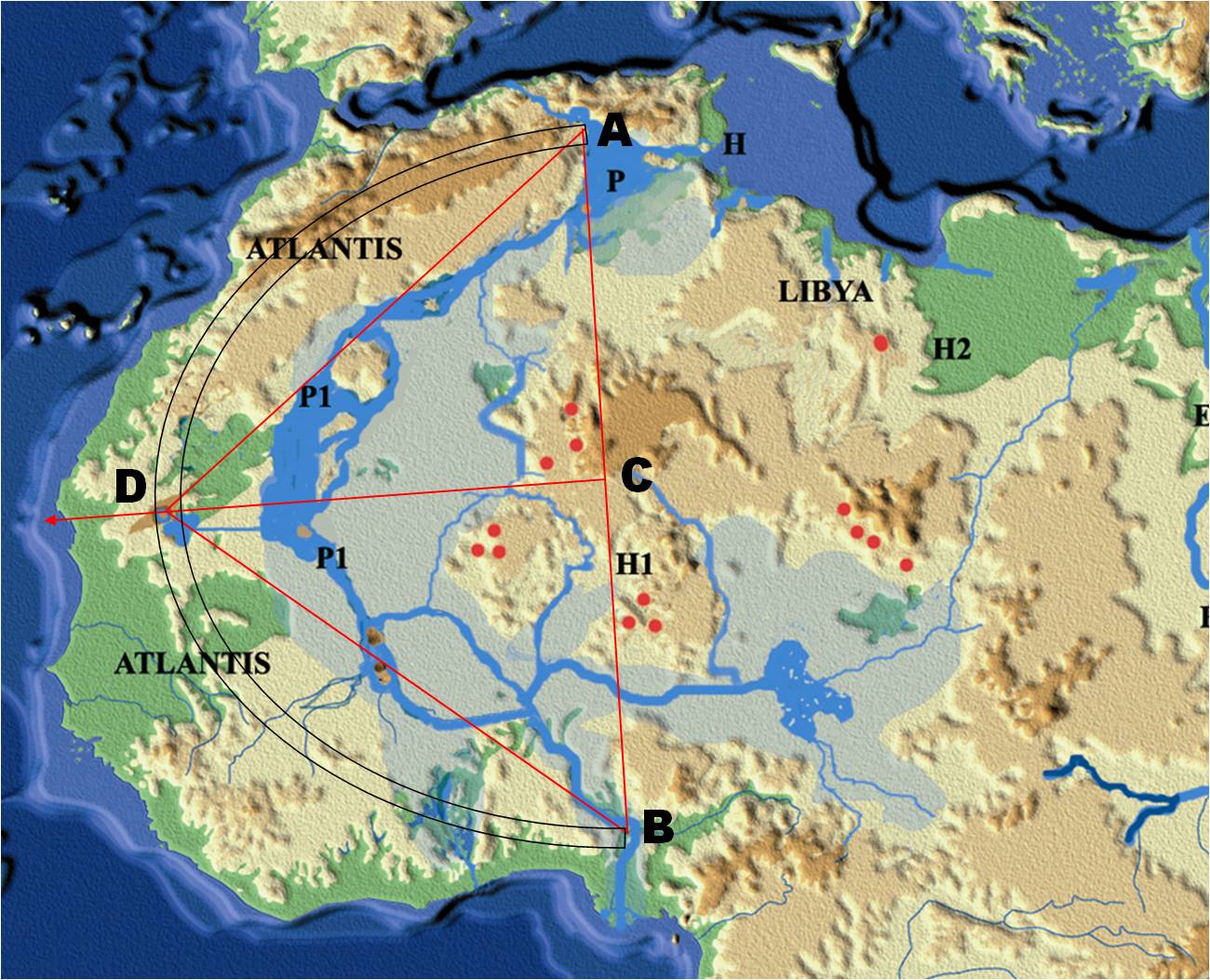 This equal sides triangle has its top almost exactly in the “Island of Atlantis”. (and the continent). This point is the “Center of all”. The deviation from the real center is a few tenths of Kms to zero depending from the accuracy of the placement of the continents’edges! And of course we are not sure about the exact points A and B, because there are not enough waters today as 10.000 years ago. So we ignore the exact level of seas and/or route of rivers.

The dimension of the arc ADB of the semicircle (or semioval shape) was given in the texts as greater than 4.300 km. When measuring the arc, it was 5.100 km. There is thus also agreement on this matter.
On the map of Africa are shown (some hypothetically due to absence of modern data for all the length) the rivers, lakes and seas formed inside the continent of that time (~ 10.000 years ago), which resulted in creating the Continent and Island of Atlantis. Of these, some still exist while others have given way to dried-up lakes and riverbeds that are ~10.000 years old. Those that are “likely” to have existed, at the ending of Last Glacial Maximum (LGM), are the waters along the shorter route that would have caused western Africa to be characterised as an island! Even today there is a lot of water, in rivers, lakes and swamps, along most of the length of the eastern and northern route. In the book “The Apocalypse* of a Myth” is provided as much up-to-date information as it was possible for the present writer to find.