Libya is a big country with large desert expanses. Its north coast is washed by the Mediterranean Sea. Be that as it may, 2,400 years ago, Herodotus journeyed through it and made notes which have survived. He referred to Libya as a …large peninsula! In addition, when on his travels there, presented briefly in another page he reached as far as the Atlantians!
Regrettably, until now, no one has given due consideration to his reports, not to add that in many translations, by inaccuracy of the translators, the word “peninsula” has been replaced by “coast” or “beach” because they overlooked the fact that Herodotus would systematically term a large peninsula as “coast” (ακτή = Coast in the after Herodotus era!) whereas a small one would be termed as peninsula or cheronissos (chero+nissos = land+island). As explained elsewhere (MOM1), an Island was a landmass that gave the impression of a duck (Nissa) floating on water, while a cheronissos or peninsula was also as such, but at some place must be connected to the mainland.
From Roman times onwards, Libya was commonly considered to be all the land from Egypt to the Atlantic Ocean. Earlier however, this was not the case at all, as documented by the great travellers and historians of the Pre-Roman times, namely, the ancient Greek scholar-scientists.
The starting cause for Libya forfeiting its standing as a peninsula, were the climatic changes of the Holocene Epoch, which began around 10.400 BC and are still continuing, with the steady rise in temperature bringing about various and significant sea and geomorphologic and other changes. 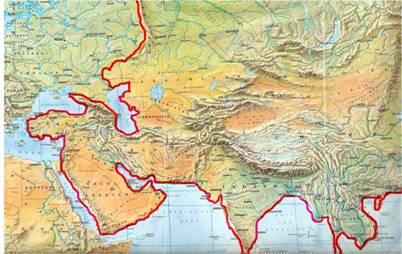 Image 1. Asia today, to the right and above the red line, with Europe to the left. 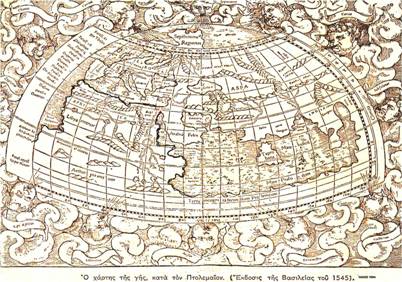 Image 2. Map of Earth according to Ptolemy (Basle edition of 1545) 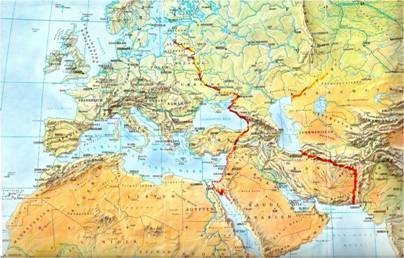 Image 3. Asia, according to Strabo, was between the red lines. There was no knowledge of the western/eastern boundary. The concept of the “Big Libya” was established from the time of Strabo. 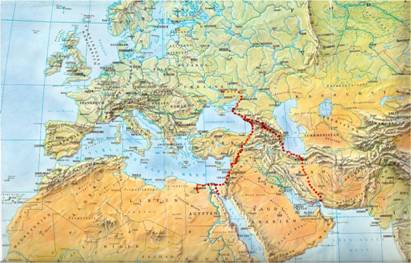 Image 4. Going back in time (~450 years from Strabo), Herodotus precisely defines the borders of Asia of his time (Between the lower red lines). 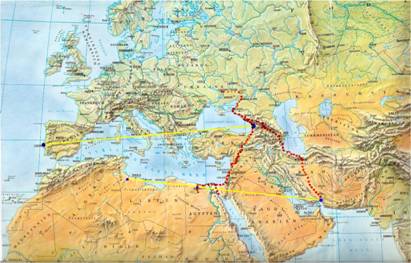 Image 5. Herodotus goes on to delimit the lengths of Europe, Libya and Asia. He equates the length of Europe with that of the other two together (yellow lines). This is the same reasoning applied by Plato in Timaeus, where he gives the length of Atlantis as being greater than that of Asia and Libya together, i.e. longer than the Europe of that time which has remained relatively unchanged to date! Thus was derived the solid conclusion that Libya went only as far as the sea at the Gulf of Gabes. This further shows that exactly there, at Gabes, was where the Pillars of Heracles had always been. This personal journey of Herodotus leaves no disputable or undecided issues as to distances, since overland to Gibraltar is so long and so difficult because of the uneven terrain and the Atlantic mountains, that it is impossible to cover the same (refered) distance in the length of time it would take if one was travelling through desert. Therefore, the length of Europe, Asia and Libya are concurrently determined, as is the location of the Pillars of Heracles which are validated by completely different testimonies as indeed being at Gabes. 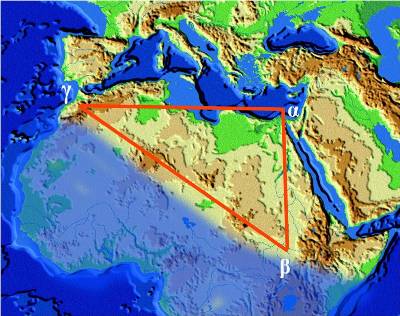 Image 6. Strabo defines the boundaries of Libya as a right triangle whose altitude is the length of Libya. He is the first to establish Libya as extending to Gibraltar. Since then, these have been considered to be the “European” boundaries of Libya, mistakenly assuming that it reached as far as the Atlantic Ocean. A long time before Strabo, Homer was the first to report on Western Ethiopians. He defined their land as being in the blue area to the west of Strabo’s triangle, in today’s West Africa. In the book “The Apocalypse* of a Myth”, are presented detailed reports and analyses of the ancient texts of several ancient philosophers and writers. 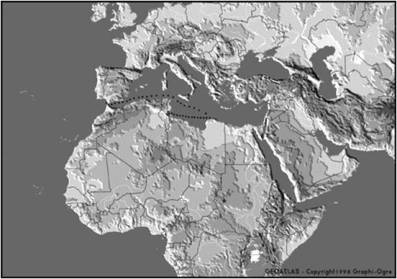 Image 7. The voyage of the Samians (islanders of Samos, Aegean Sea) as described by Herodotus cannot be logically explained by contemporary commentators with the Pillars being regarded as at the oceanic side of today’s Spain. His account is, as always, concise, which makes it impossible (nautically) for the Samians to have made the route they have been attributed with, namely, all the way to the island of Gadir in SW Spain. Especially when taking into consideration the direction of the winds given by Herodotus. 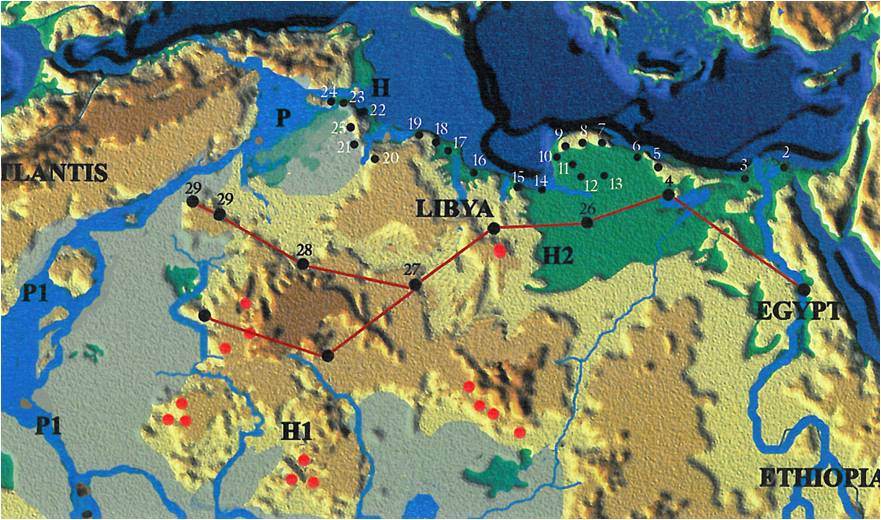 Image 8. This journey of Herodotus has already been verified historically (and archaeologically even the archaeologists had not in their mind the Herodotus trip to Libya) for 5 out of his 6 stations in the interior of Libya. The fifth station on the map (#27), which is at the Garamantes peoples, was verified by relatively recent archaeological recoveries. In which case, after that, on of the two alternative routes (two points #29 … both in the north root) before meeting Atlantians as he writes, is correct, with slight deviations and with the most likely being the southern one. The divergence of the proffered route from that declared by the archaeologists was approximately 60-80 km. The map shows the bodies of water along the length of the Atlas Mountains that define Atlantis as an island. Also shown, is the hypothetical watercourse from Lake Siwa (top right) as it probably joins to Lake Chad, going on to join the River Niger and reaches the Atlantians (you may see it on the next map). Then, the water flow turns north and discharges into the Mediterranean, except of course the south outlet. In this way, Libya is depicted as truly being a peninsula, as declared by Herodotus, even though it has been discounted as such, either due to mistranslation or lack of interest or careless observation. Thus, a landmass surrounded by any kind of waters (as in the case of the island) and has only one narrow connection to the land. 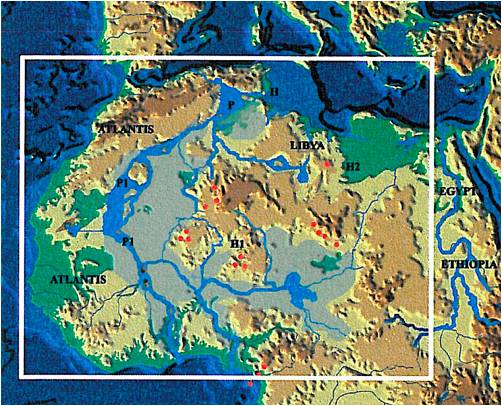 Image 9. Hypothetical illustration of the Africa of that time, with Libya depicted as a peninsula, as stated by Herodotus. Its only overland means of access is a small strip of land between Lake Siwa and the Mediterranean Sea (top right), about 60-80 km wide. Today, recorded are Lake Siwa and the rivers that supply it, Lake Chad, which has considerably reduced in size especially over the past few decades and the river network that supplies it, the riverine area of Niger that spreads as far as “Atlantis” in the regions P1, as well as a multitude of Chotts, i.e. seasonal lakes that cover region P, which, when water once covered that entire area, must have been the size of the Aegean Sea. In order to conclusively prove this uninterrupted body of water around Libya at that time, modern researches need to be conducted. Some such, commenced for different reasons, were carried out in areas in the east of the illustration and have revealed many dried-up rivers and lakes containing 10,000 year old fossils of fish, crocodiles and aquatic life that continues today to survive in the Nile. Dried-up lakes and rivers dated at around 10,000 years have been located also in central and western parts of Africa. So it appears that all these now waterless areas once had a rich aquatic past and a very different environment then, at the very beginning of the Holocene Epoch. These and other findings that have surfaced every now and then in recent years, add force to Herodotus claim. It is now considered almost certain that in the future, those bygone watercourses, rivers and lakes which once surrounded, delineated and gave good reason for his designation of Libya as a Peninsula, will all be traced. 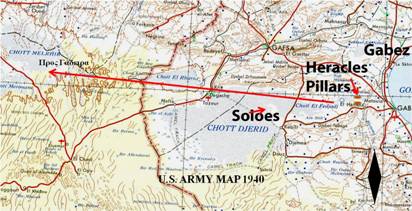 Image 10. This Second World War map depicts the region between Libya and Tunisia. There is shown a lot more water at that time (1940) than there is today, although, even now in the winter with a little rainfall, boats are used to get around which, in the summer, rest in the sand… Hypothetically indicated, albeit after chronological investigation, is the historically ‘mislaid’ Cape Soloes as well as the probable site of the Pillars of Heracles which are now historically proven as definitely having been at this region of the Gulf of Gabes. The distance from the cove of the gulf to the beginning of the island-continent of Atlantis, is approximately as was defined by Ephorus, namely, as equal to a 4-5 day voyage, something that, anyway,could never be confirmed at Gibraltar. 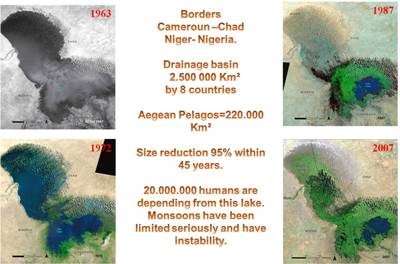 Image 11. A picture paints a thousand words. Aerial pictures of the still magnificent Lake Chad, photographed over four and a half decades. Its basin used to be 11 times that of the Aegean archipelago. It has reduced in size by 95% in just 45 years! It shows to startling effect how rapidly and the extent to which The Earth’s climate has changed. The future of the lake is murky. One can imagine its capacity 10,000 years ago and the dimensions of the rivers or the volumes of rain from the monsoons that supplied it. Found Here Birkett, C., and I. Mason. 1995. A new global lakes database for remote sensing programme studying climatically sensitive large lakes. Journal of Great Lakes Research, 21 (3) 307-318. International Lake Environment Committee, the United Nations Environment Program and Environment Agency, Government of Japan. 1997. World Lakes Database. 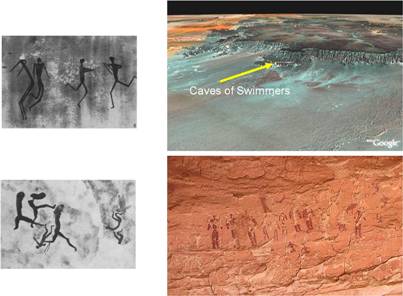 Image 12. The region of WADI SORA (SW Egypt) is famous for its colourful and exceptional cave drawings also depicting swimmers diving and in various related poses. They are approximately 10,000 years old. Today, nowhere around and for long distances, is there any trace of water; only seemingly endless desert.

Conclusion.
Looking just at today’s existing bodies of water, it seems that there is enough water around Libya to somewhat approach the concept of “peninsula”. Over certain wide areas, there is currently no data on rivers or lakes, big and small, to be added to the map of the “peninsula”. At any rate, for the time being, provisional but inconclusive research indicates that most probably, in this case too, Herodotus, as always, will be proven true.