This voyage, which was the first mission of colonization by Libyo-Phoenicians (as it writes), was engraved on a plaque found at the temple of the Carthaginian Zeus-Hammon or Amun. It was transcribed and has survived to today. But at no time could a reasonable explanation be given for most of the places described on it or about the directions one would need to follow.
In the Greek version of the book “The Apocalypse* of a Myth”, are laid out the ancient texts and their retranslations.
It goes without saying that they have been meticulously translated for the English version. The latest explanations are given and for the first time ever, Hanno’s journey is made sense of.
While many areas continue to contain water today, it is not enough to justify navigation by ship, except in a few exceptional cases of certain lakes in the western regions of the map below. 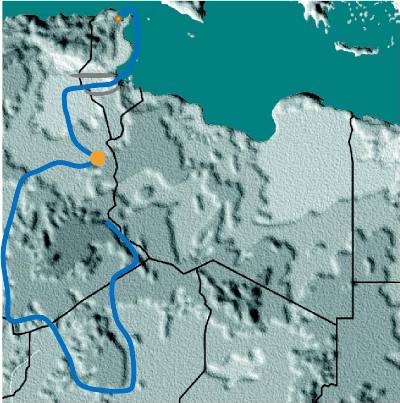 Image 1. The voyage of colonization by the king of the Carthaginians, Hanno. The complete ancient text and its connotatively accurate translation is in the book “The Apocalypse* of a Myth.” (Greek Version – only the relevant translation is in the English Version). The waterways no longer exist and some rivers and gullies are too few to allow water travel. The route is hypothetical of course, devised according to the journey as described in the ancient text. The most definite location is that of the Pillars of Hercules. It matches perfectly and is in absolute conformity as to the distance and duration of the voyage from Carthage to the cove of the bay of Gabes.